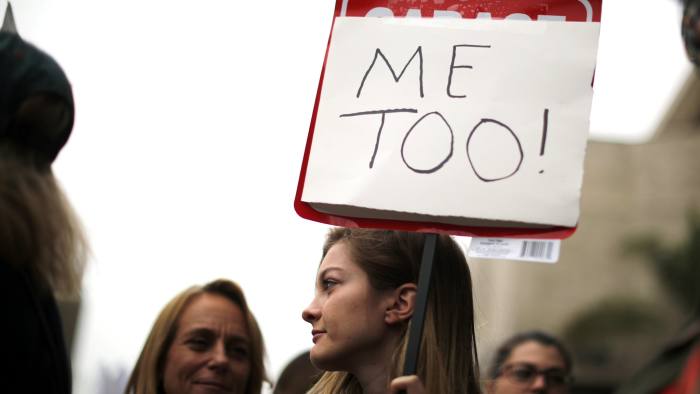 Tech investors are increasingly including “#MeToo” clauses in deals with start-ups, forcing entrepreneurs to disclose complaints about sexual harassment in the workplace, as more women speak out about sexism in the industry.

Lawyers and deal advisers said such clauses were being used in contracts, due diligence exercises and codes of conduct on both sides of the Atlantic, following high-profile allegations of harassment and discrimination at major tech companies including Google and Uber.

One investor, who declined to be named, said similar clauses had also been used by asset owners that back venture firms, such as pension funds and family offices, after sexual misconduct allegations at US companies including 500 Startups, Binary Capital and Draper Fisher Jurvetson, and Israel’s Pitango Venture Capital.

The wording, used in the “reps and warranties” that are part of dealmaking agreements, typically states: “There are no allegations, complaints or claims of sexual harassment made against any directors, officers or employees of the [

Shing Lo, venture capital lawyer at Bird & Bird, the international law firm, said the clause was recently used by a British company developing “internet of things” technology when it invested in a UK start-up, as well as a European venture fund that invested in a retail and consumer start-up.

Victor Basta, founder of Magister Advisors, a boutique investment bank, said a recent deal involving a large US acquirer of payment processing technology required a specific screening of employees for cases of harassment or improper conduct as part of its due diligence.

Carson Burnham, co-chair of the mergers and acquisitions practice at Ogletree Deakins, the labour and employment law firm, said many firms disliked the clauses.

“People are still grappling with the extent to which the issue itself is material and frankly, you know that many of the people involved in these transactions and corporate development are men,” she said. “But certainly for the more progressive firms, we are seeing that this is being included.”

The Guardian Media Group’s venture capital fund has drafted a pledge about diversity and harassment for founders to sign, but declined to specify details, saying it had not been finalised.

Ms Lo said investors had become more “mindful” about risks relating to harassment allegations. “We are asking companies to confirm that they’re not aware of any harassment from a director, and I’m seeing it more and more,” she said. “A lot of start-ups are filled with men — young men.”

The #MeToo movement has caused significant fallout for many major tech companies, including Uber, where more than 20 employees were fired after an investigation into sexual harassment claims that contributed to the ousting of founder Travis Kalanick.

Mr Basta said: “Three years ago sexual harassment issues were not a major part of mergers and acquisitions due diligence.

“Today, we regularly see large investors and mergers and acquisitions buyers asking detailed questions about sexual harassment in due diligence, and this is a direct result of the huge impact the #MeToo movement has had.”